It’s a sign of progress that Youth Violence Prevention was not chosen as a top concern of community members surveyed in our Listening Engagement before the 2017 Issues Convention.  One reason may be that the Youth Violence Prevention Task Force had accomplished their long-held goal of instituting Group Violence Intervention (GVI) in Kalamazoo and had created the youth organizing group Future Leaders for Peace.   We are deeply grateful to the members of the Youth Violence Prevention Task Force for their hard work on GVI since 2012, their creation of Future Leaders for Peace, and the strong partnerships they formed with community agencies.  All that experience and collaboration will not be lost.  Some of their members have joined one of the other task forces, some continue to represent ISAAC on agency boards that continue the work on youth violence prevention, and some continue to lead Future Leaders for Peace.

Group Violence Intervention history:  Following a listening session where community members communicated youth violence as a social justice concern in our community, late 2011 and early 2012, ISAAC began meeting with officials of the City of Kalamazoo to discuss David M. Kennedy’s work on Group Violence Intervention (GVI). In March of 2012, ISAAC brought Professor Kennedy to Kalamazoo to speak at our banquet and meet with city officials and community leaders about this strategy. In October 2012, Chief Jeff Hadley committed to begin the work to bring this strategy to Kalamazoo. In the subsequent years, ISAAC has been working with the Kalamazoo Dept. of Public Safety (KDPS), Northside Ministerial Alliance, Goodwill, the City of Kalamazoo and members of the community to lay the groundwork for this strategy to be effective.

In 2017, law enforcement, social services, and community leaders held two “Call-Ins”, one with juveniles, to give them this message: We love you. You are a part of this community and we want you to remain Safe, Alive and out of prison. Outreach services were also present to offer the assistance needed to help them on a better path. To date, several of these individuals have reached out for relevant services and have put down their guns.

In 2017, ISAAC collaboratively presented GVI to the City Commission; served on the GVI Board and GVI committee to hire a GVI Coordinator; and worked hard to ensure a Culturally Competent Approach was implemented.

In 2017 ISAAC was also a co-sponsor with Coalition for Common Ground: Reducing Gun Violence Together (CCG), MOMS Demand Action Kalamazoo, and Galilee Baptist Church for the 4th Annual Service of Remembrance and Action. Over 150 people attended as Community members honored the memories of those in our area who have died or been injured by firearms. This Service was followed by a fellowship gathering with refreshments and opportunities to connect with others, pick up resources, and join others for action that honors the memories of those who have been taken by gun violence. ISAAC also served as a co-sponsor on Kalamazoo’s National Gun Violence Awareness Day with CCG and MOMS Demand Action.

Future Leaders for Peace, as the youth organizing arm of ISAAC, will continue their impressive work of training youth organizers: 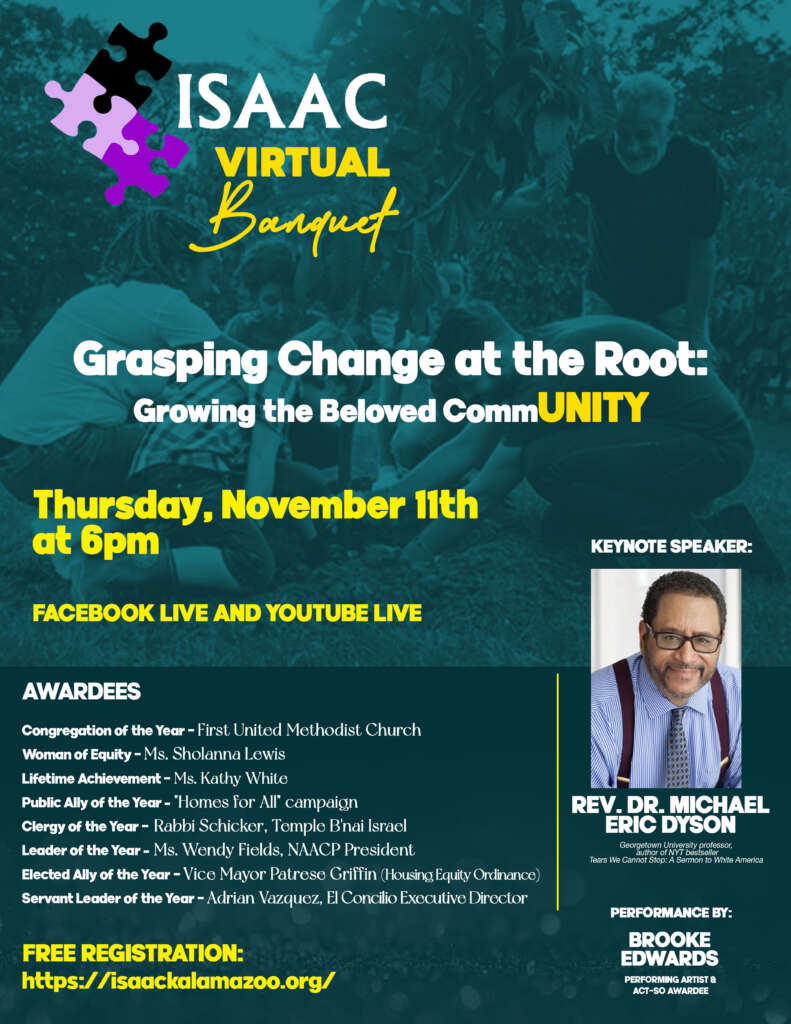